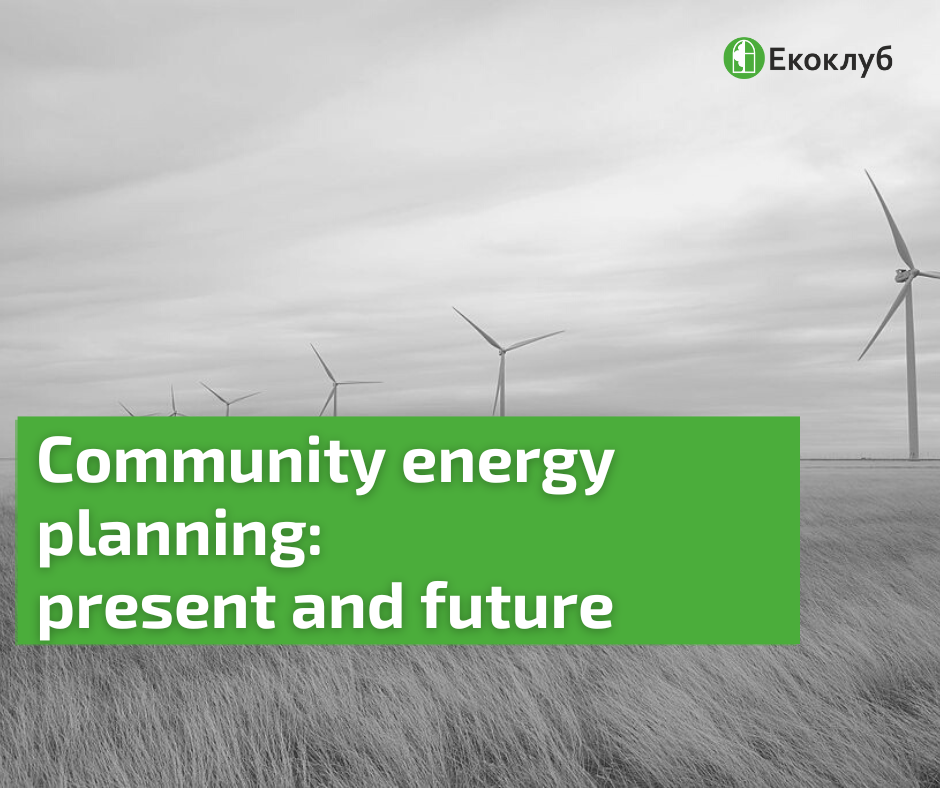 The energy industry is one of the main causes of climate change. Its transformation and transition to renewable energy sources is a challenge for Ukrainian communities, especially during the Russia’s open war against Ukraine.

The Ecoclub presented a study in which it analyzed how the Covenant of Mayors signatory communities are taking steps towards energy independence and environmental protection. We are talking about the ambitiousness of the  sustainable energy and climate action plans of the municipalities, their cooperation with the central executive authorities and the development of the Municipal Energy Plans with Artur Obidnyk, head of the expert group on the energy efficiency of public buildings (Energy Efficiency Directorate of the Ministry of Communities and Territories Development of Ukraine).

– As of September 2022, 311 municipalities are signatories to the European Commission’s Covenant of Mayors initiative. As part of this cooperation, they are required to develop sustainable energy and climate action plans (SECAPs) to reduce greenhouse gas emissions by 30% by 2030 compared to the base year. How do central authorities assess the ambition of these communities to achieve climate neutrality and energy independence?

– The Covenant of Mayors is a voluntary initiative, therefore there are no tools at the state level that could oblige, control or verify the goals of municipalities. Thus, the responsibility for the level of goals and the way they are achieved remains with the municipalities.

On the one hand, the study conducted by Ecoclub shows that not all plans of municipalities are developed in good faith, there are several shortcomings, but this isn’t a systematic phenomenon. And the number of plans developed to date shows that the cities are actively involved in the preservation of the environment even with their own initiatives, so they play an active role in it.

– The contribution of communities and municipalities to the achievement of the Nationally Determined Contribution is particularly important. Without their active involvement, it is impossible to achieve goals for reducing greenhouse gas emissions.

The new Energy Efficiency Law provides for the development of the Local Energy Plans (LEPs). This is a soft assignment of responsibility for planning the volume of reduction in energy consumption and increase in energy efficiency in the field. Due to such LEPs, each community will become an integral part of a large contribution to the achievement of the overall goal of the country.

According to the Law, communities must develop local energy plans based on their own resources, capacities, characteristics and capabilities. Now we see that the regional administrations and central government bodies will not have leverage of direct influence on the development of LEPs, at the regional level it will be possible to provide recommendations, the decision to consider or reject of which will remain with the municipalities.

For those who have Sustainable Energy and Climate Plans, it will be possible to integrate with the LEPs, so the development of the LEPs themselves will become much easier and faster. Thus, the SECAP can be, to a certain extent, an equivalent replacement for a significant part of the LEP.

– Ecoclub presented a study on the ambitiousness of the action plans for sustainable energy development and climate developed by the signatory communities of the Agreement. What is your opinion on the study?

– The study showed the problems of some municipalities in the development of SEСAPs. There are cases of an unscrupulous approach to the development of plans, setting goals and ways to achieve them: they indicate the year with the highest greenhouse gas emissions was recorded as base one. So, it’s easier for such signers of the Covenant of Mayors to demonstrate the achievements they’re setting.

Such shortcomings are important from the point of view of building state policy in this area. This information should be considered when working out the procedure for developing LEPs. Therefore, the results of the study are a good indicator for us.

– Share your opinion on the findings of  Ecoclub study: can this information become a tool during the energy planning of communities in the post-war green recovery?

– At the very least, the results of the study can be considered by the communities in the further development/implementation of the LEPs and SECAPs in order to avoid the planning gaps noted by Ecoclub.

– How can local governments influence the national legal acts prepared by the central authorities in the field of energy efficiency and renewable energy?

– All acts developed by the Ministry are published for public discussion. With regard to such acts as concepts, strategies, amendments to laws, etc., we additionally try to conduct discussions and presentations of the main ideas and concepts provided for in the draft acts. Of course, with the possibility of feedback in the form of comments or suggestions from participants. Such measures are not provided by law as mandatory, but they are necessary for us as developers to improve the quality of the preparation of acts.

In addition, if the act is regulatory, it must be made public for at least a month. During this time, you can familiarize yourself with the draft act, provide comments, observations, suggestions.

Municipalities can also apply to the Ministry with proposals for solving the problems found in the legislation. I note that the description of the problem should be as detailed as possible, since this will facilitate the process of initiating appropriate measures by the Ministry.

– As a representative of the central executive authority, how do you assess the importance and benefits of such cooperation for communities?

– With regard to acts that have a direct impact on the functioning and obligations of communities, their active involvement is important and urgently needed. The activity of the communities will help to avoid mistakes, improve the quality of the formation of policies and regulations, and allow the communities themselves to prepare for new mechanisms.

– Local governments will play an important role in the post-war reconstruction. Do the central executive authorities have a policy in this area and specific action plans, how will they be stimulated to achieve ambitious climate goals?

– I compare this process with the development of LEPs. I believe that a nationwide tool should be developed to support the implementation of energy plans. Also, such support programs can be implemented at the regional level. Depending on the level of goals and their achievement, the best municipalities should be selected, which will first get access to state supported resources and international technical assistance projects.

Such a mechanism of attraction will make it possible to evenly do the work on the implementation of energy plans, creating competition in this area. It will also improve the quality of plans, the level of ambition of goals and the effectiveness of their achievement.

This article was published within the framework of the project “Implementation of the dialogue between the central executive authorities (СEA) and local government bodies (LGB) on emission reduction issues”, which is carried out within the framework of the Initiative for the Development of Environmental Policy and Advocacy in Ukraine, implemented by the International Renaissance Foundation with the financial support of Sweden.

Opinions, conclusions or recommendations are those of the authors of this document and do not necessarily reflect the views of the Swedish Government. Responsibility for the content of the document is solely of the NGO “Ecoclub”.