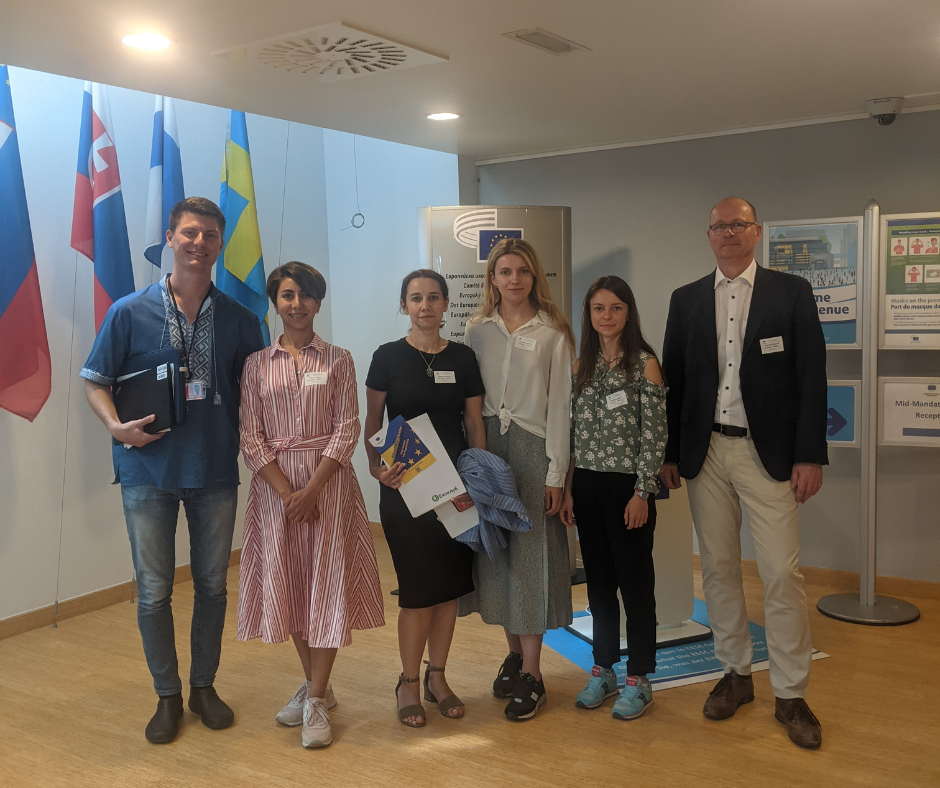 Civil society — is the source of up-to-date information, process control, and partnership for European integration — director of the representative office of the Heinrich Böll Foundation in Ukraine, Johannes Foswinkel

The goal of the visit was to discuss the situation in Ukraine, climate and energy threats, and human rights violations, as well as the impact of war on development. In addition, the visit aimed to formulate the necessary needs and support for Ukraine and the EU regarding the reform’s implementation agenda, the agenda of further development, and future reconstruction.

“We met with deputies of the European Parliament, representatives of the Committee of Regions, the Support Group for Ukraine of the European Commission, the Heinrich Böll Foundation, and members of different NGOs and initiatives,” said Ecoclub’s campaigner Nataliia Kholodova.

During the first 100 days of the invasion, russia received more than 93 billion euros from fuel exports. The primary buyer of this fuel is the European Union. This income finances the war, the city`s destruction, and the daily killing of Ukrainians.

In this tough time, governments must unite to save Ukraine, provide peace, and the world transition to clean, and safe renewable energy in a fast and just way.

It also means the end of all trade relations and the divestment of Gazprom, Rosneft, Transneft, Surgutneftegaz, Lukoil, Russian Coal ,and others, and the termination of any financial services for russian energy companies operating in the coal, oil and gas sectors worldwide.

It is hard to make plans for recovery before the end of war, but we believe that this issue should be raised already. We need to be ready for complicated and complex processes.

Ukraine’s reconstruction should be based on the principle “build back better” and take into account environmental aspects.

Requirements for EU members – are the indicators for reforms in Ukraine on the way to becoming its candidate. It is crucial, that financing of reconstruction would not allow a return to the previous situation, before the full-scale war, with it ignorance of environmental requirements. Ecoclub, along with other NGOs, developed the principles of Ukraine’s green recovery, which, in our opinion, should be taken into account during reconstruction.

These problems exist due to the preservation of Soviet-like approaches to management, lack of experience, and knowledge of good all-levels governance.

In addition, one more problem of institutional capacity may appear — the desire to demonstrate economic achievements at any cost during the post-war recovery.

To deal with such risks we must:

– Convey at all levels to Ukrainian authorities, that environmental protection, preservation, and development of biodiversity are one of the EU priorities and so it must be in Ukraine.

– Ensure the spread of advanced environmental knowledge and practices to Ukrainian authorities at all levels.

– Create a mechanism for donor funds, that will not allow financing recovery initiatives, which ignore environmental demands, even under low institutional capacity conditions.

The importance of preserving and improving SEA and EIA procedures

One of the main procedures for taking into account environmental requirements and ensuring public participation is EIA and SEA. During the war and post-war reconstruction, the requirements to conduct EIA were canceled. However, even before the war, these procedures were not perfect, which led to the extremely dubious decisions.

This increases the risks of implementing projects that threaten the environment. Ukraine already should develop a reform of the SEA and EIA, which would eliminate the obvious shortcomings including:

– The need to conduct full EIA procedures, even for those projects that do not pose a threat to the environment and communities.

– Conflict of interests in regional administrations, which, on the one hand, attract investments, and on the other hand, have to perform the EIA procedures. This problem is closely related to the problem of the low institutional capacity of the local authorities responsible for conducting EIA.

Central heating systems are a very important asset for the transition of Ukrainian cities to low-carbon heating. Currently, central heating consumes about 7 billion cubic meters of gas per year. However, due to decades of poor state policy in this area, there is a real risk of collapse in this area, which has already happened in several cities.

War only made things worse. Today, the Russians have damaged or destroyed more than 300 boiler houses and damaged heating lines. It is important that emergency assistance, which provides heat to the cities, does not lead to the destruction of the central heating system.

In the future, support must be focused on:

– the modernization of central heating’s ability to increase its energy efficiency,

– abandoning gas and coal and switching to biofuels instead,

– meeting the requirements for biomass sustainability,

Climate change is already affecting people’s quality of life and there is a need to restructure the infrastructure of settlements and communities in the next 10-15 years.

What Europeans and their leaders think about war and post-war recovery?

Europeans do not always understand why they should support Ukraine. Therefore, it is crucial to inform government officials as well as common people about the situation in Ukraine and the will of Ukrainian people to live in a democratic society. The main goal now for Ukrainians is to achieve public support among the EU citizens.

The EU will continue usage of Russian gas until the end of the winter of 2022–2023. Even those deputies who support Ukraine, say that it is unrealistic to stop using Russian gas. They say that it may lead to EU disintegration if Germany refuses Russian gas now. They thinking about the search and purchase of gas from other authoritarian countries.

It is too early to talk about Ukraine’s reconstruction; the war must end. Now the main priority is to give Ukraine enough weapons for victory and then promote reforms. But reconstruction should take place on the basis of the conditions of Ukraine’s accession to the EU. In Ukraine, it will be necessary to rebuild cities from scratch, and this chance should be used to rebuild better.

Now both Europe and Ukraine need to concentrate as much as possible on energy saving. Centralized heating is a resource that must be protected and developed.

Quotes from meetings with partners

Green transformation is necessary for survival under these conditions. Rebuilding to EU standards will save money on the long journey to the EU.

Viola von Cramon-Taubadel, is a German politician, member of the European Parliament, ex-deputy of Bundestag from the Alliance 90/The Greens

It is the war for freedom. You don’t have to explain to us the importance of green reconstruction, but we have to communicate with civil society in Germany and other countries

Voices of Ukraine must be heard. We are looking for ways to support your work

Markus Lippold and Ruta Baltauz, representatives of the General Directorate of Energy and the General Directorate for Neighborhood Affairs and Enlargement Negotiations, and the Ukraine Support Group from the European Commission emphasize the rejection of ideas about the low price of nuclear energy and the high cost of energy from renewable sources.

The long-term support of the European Union institutions and the active public of the EU countries in the future reconstruction of Ukraine is important. This requires an understanding of Ukraine’s key steps towards an energy-independent green future.

We must clearly meet the challenges of post-war reconstruction, which are already emerging, short-term plans must take into account the need to preserve and reconstruct centralized heat supply systems, the growth of RES generation, the mandatory inclusion of climate change adaptation measures in the plans for the reconstruction of settlements

Ecoclub will continue to communicate with international partners and work on promoting the ban of fossil fuels, in particular Russian, planning the post-war reconstruction of the country according to the principles of sustainable development and energy independence of communities. If you have experience, knowledge, vision on the development of energy efficiency, renewable energy, green reconstruction, improvement of national environmental protection policy and want to share with us, please, share your thoughts. In addition,  Ecoclub regularly organizes events for local authorities, experts and public organizations on the listed topics, we invite you to subscribe to the newsletter, where we announce these events, as well as grant opportunities for development.