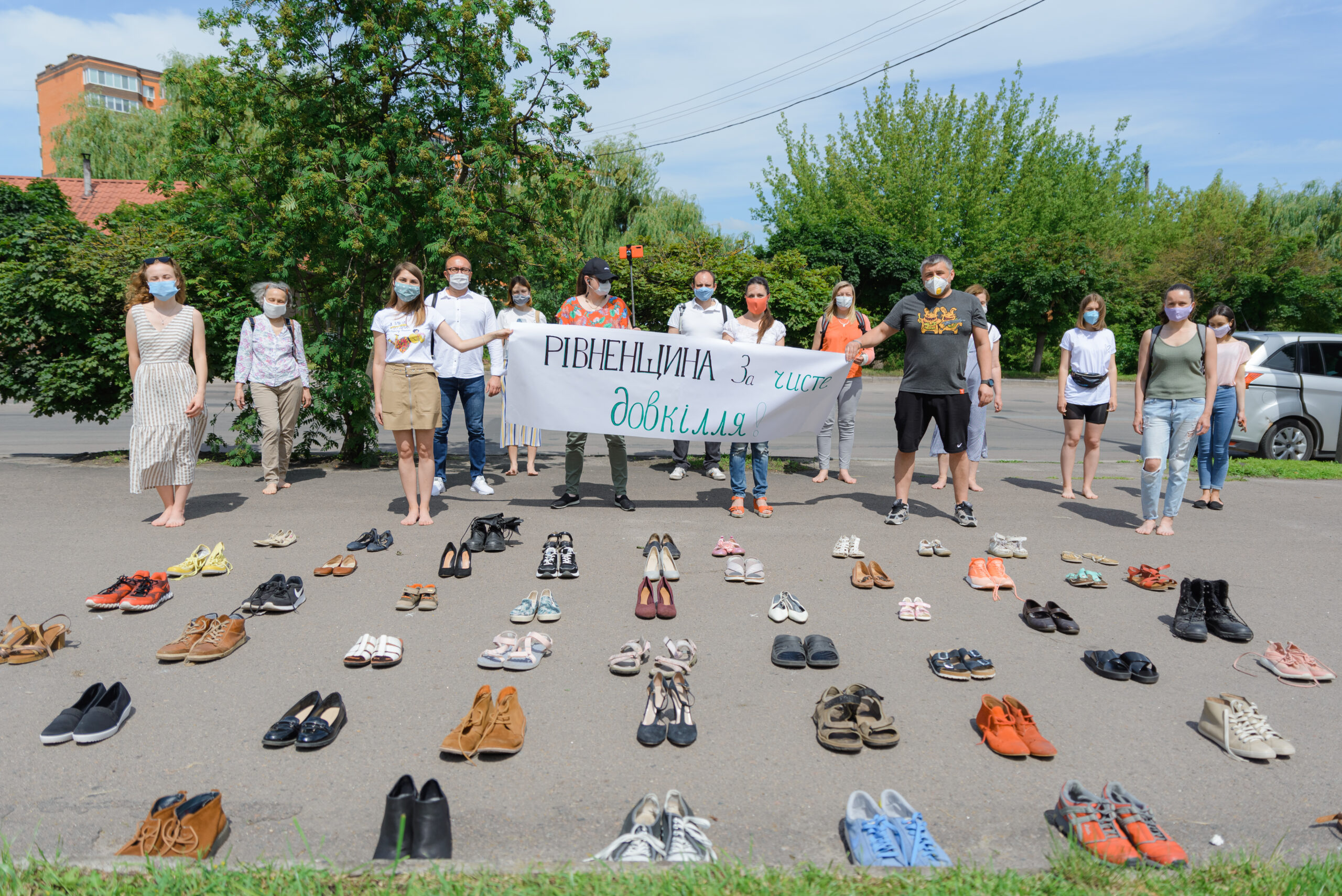 The court proceedings of the case were postponed to August 5, 2020 at the initiative of Technopryvid Invest Group LLC. Representatives of the company have justified their decision as “due to the quarantine measures caused by the COVID-19 pandemic”.

“We expected that the hearing on our case would finally begin today. After all, the plaintiff publicly announced his intention to defend his business reputation, which allegedly suffered due to criticism of activists. However, the hearings have been postponed for the third time, although opponents could take the advantage of videoconferencing”, said Vitaliy Kitovsky, a defence counsel of the NGO “Ecoclub”.

Meanwhile, about 20 supporters of Ecoclub and representatives of the local community of the village of Horodok, where the planned wood processing plant is being built, gathered near the building of the Commercial Court of Rivne Oblast. They placed about 50 pairs of shoes at the entrance of the court building to show that the public was well-aware of the case and was following the proceedings, even if they could not be present in the courtroom due to quarantine restrictions.

“We want to thank everyone who supports Ecoclub on social networks and has joined the protest action with shoes near the court today, and it is about 80 people. It inspires us to stand up for the community’s right to a safe environment with even more confidence”, said Oksana Mariuk, a legal advisor of Ecoclub.

It will be recalled that representatives of the Technopryvid Invest Group LLC, the beneficial owner of which is Kronospan Holdings Limited based in Cyprus, demanded to oblige Ecoclub to refute and withdraw publications about the risks from the planned activities of the Kronospan wood processing plant in Horodok, near Rivne, which were made public by activists. They also requested compensation of 150 000 UAH (5000 EUR approx.) for non-pecuniary damage caused to its reputation, which was subsequently reduced to 1 hryvnia (.03 Euro) plus court costs.

Earlier, members of the European Parliament got interested in the case. In a letter from Viola von Cramon-Taubadel, Vice-Head of the EU-Ukraine Parliamentary Association Committee, to the Prime Minister and the Chairman of the Verkhovna Rada of Ukraine according to Ms. Cramon, the case with Kronospan demonstrates the flawed execution of the Law on Environmental Impact Assessment (EIA), and a lawsuit against the Ecoclub has the characteristics of a so-called Strategic Lawsuits Against Public Participation (SLAPP), when lawsuits are designed to censor and intimidate public activists who criticize certain decisions.

In the letter, members of the European Parliament call on the Ukrainian government and lawmakers to urgently correct the shortcomings of the Law on EIA and to develop the above-mentioned measures in order to fulfil a fundamental requirement of the EU-Ukraine Association Agreement. Moreover, they highly recommend developing a legal framework in order to guarantee the security of environmental activists, journalists and civil society organizations along the lines of the upcoming EU anti-SLAPP directive. The letter was supported by 26 European parliamentarians.