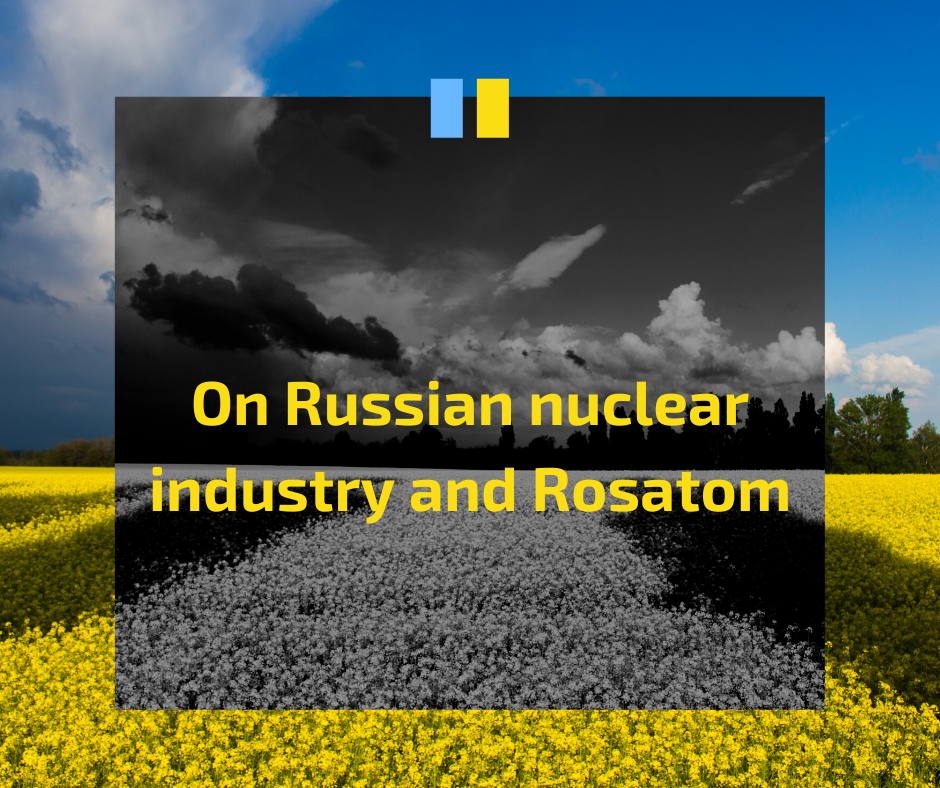 To the President of the European Council
Charles Michel

To the President of the European Parliament
Roberta Metsola

To the President of the European Commission
Ursula von der Leyen

To the European Commissioner for Energy
Kadri Simson

For the 20th straight day stiff Ukrainian resistance continues to hamper Russian invaders. Russia is keeping the whole world just one step away from nuclear disaster as it targets nuclear energy facilities with military attacks.

As of 15 March 2022, both Chornobyl and Zaporizhzhia nuclear power plants stay under the control of the Russian military. With its terrorist actions, Russia violated the UN Charter, multiple international agreements on nuclear energy use, three UN Conventions and all seven IAEA pillars of nuclear safety. Russian troops shelled the power plant buildings, held power plant staff captive, cut off electricity supply, thus imposing a threat of an accident that might
lead to nuclear disaster. By doing so, Russia is deliberately committing war crimes and conducts nothing less than nuclear terrorism operations.

On 12 March State Nuclear Regulatory Inspectorate confirmed that representatives of the Russian state nuclear company Rosatom are present at the premises of both Chornobyl and Zaporizhzhia NPPs and are “consulting” their Ukrainian counterparts.

It is crystal clear that Russia is using its nuclear company as one of the tools in the ongoing war. At this very moment it is important to impose tough sanctions against Russia, which will halt its ability to continue waging a brutal war on Ukraine and threaten international security.

While EU heads of states and governments work toward urgent phasing out of Russian fossil fuels, the nuclear power sector has a similar problem to address. Sector’s dependency on various companies with Russian derived capital is high. All over the world the nuclear industry is heavily dependent on Russian uranium imports, VVER-fuel supplies, servicing and maintenance of nuclear power plants and plans to build new ones. The EU’s latest sanctions on Russia do not (as of yet) include the nuclear sector.

The Russian nuclear giant Rosatom is involved in nuclear power plant projects in Hungary, Egypt, India, China, Iran, Turkey and other countries. It has a portfolio of overseas orders worth $133 billion. As a reaction to Russia’s invasion of Ukraine in February 2022, Finland already halted the Hanhikivi-1 project. The Hungarian government is well advised to do the same with Paks II.

TVEL, the Russian nuclear fuel manufacturer, which is owned by Rosatom, supplies the nuclear fuel to the most of VVER reactors in the EU: Loviisa 1 and 2 in Finland, Paks 1 and 4 in Hungary, Temelin 1 and 2 and Dukovany 1-4 in the Czech Republic, Bohunice 3 and 4 and Mochovce 1 and 2 in Slovakia, Kozloduy 5 and 6 in Bulgaria. Bulgaria, Slovakia and Hungary are using solely Russian fuel (supplied by TVEL) at their NPPs, while for Finland and Czech Republic Russia is one of the fuel sources.

Rosatom owns numerous production facilities across the EU and this expansion should be stopped. For example, despite the war in Ukraine, the French industry still maintains its close ties with Rosatom. In February 2022 it was negotiated that Rosatom would acquire a 20% stake in the GEAST, a French manufacturer of Arabelle nuclear power plant turbines. Apart from that, since 2021, EDF group and Roastom have been cooperating on green hydrogen
development. The sanctions against the country that started the war of aggression in Europe and creates nuclear threats should not be selective.

In addition, the EU and U.S. power industries rely on Russia’s Rosatom and its allies in Kazakhstan and Uzbekistan for about 40% of the uranium powering their nuclear power plants. Recent U.S. ban on Russian energy imports does not include uranium, though 16% of total American purchases of uranium came from Russia in 2020. Similarly, Russian share in EU uranium supply sources represented 20 % in the same year.

We call upon the EU, governments of the EU member states, USA and other countries cooperating with Russia in the use of nuclear energy to stop all cooperation with Rosatom and its subsidiaries, sanction the company as well as its leadership, as well as ban imports of Russian nuclear fuel.