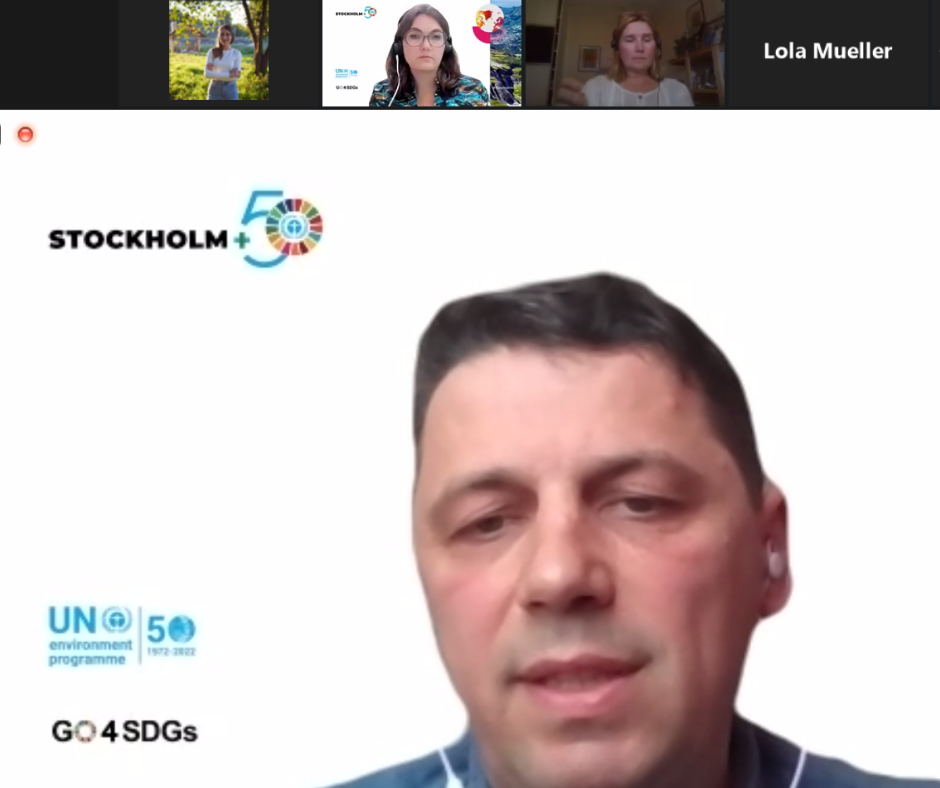 Andrii Martyniuk, Executive Director of Ecoclub, appealed to representatives of governments and public figures in Europe and North America to restore the planet’s well-being, taking into account a fair energy transition and climate protection.

On May 5, 2022, in preparation for the Stockholm 50+ International Meeting, A Healthy Planet for Universal Prosperity, a dialogue of leaders and a panel discussion on Key Messages from the Regions took place. More than 160 participants joined the event.

During his speech, Andrii focused on the risks due to dependence on fossil fuels (including russian), the danger to the world of nuclear terrorism (such as the capture and shelling of Europe’s largest Zaporizhzhya nuclear power plant) and the need to rebuild both Ukraine and the planet in sustainable way – with clean, safe energy, nature restoration and climate conservation.

Andrii’s theses during the speech at the panel discussion:

To my great regret, I have to begin by stating that we now need not only to recover from COVID-19 but also from Russian military aggression in Ukraine. Representatives of the society of many countries from our region took part in the “CSO preparatory meeting Stockholm +50” held on Monday. The war in Ukraine was one of the main topics. I will cite the main messages voiced.

– Any recovery is out of the question during the large-scale war in Ukraine. Russian troops have killed tens of thousands of Ukrainians, destroyed thousands of houses, hospitals and schools, and destroyed the entire city of Mariupol and many other municipalities. The UN security council is entirely dysfunctional. The war also undermines the foundations of energy and food security in many countries.

– The war was made possible by years of Russian fossil fuel exports. A complete ban on fossil fuels should be included in the recovery measures. Also, such a ban will likely speed-up the transition to renewable energy and thus contribute to achieving the goals of the Paris Agreement on climate.

– By seizing two nuclear plants and firing missiles over the other nuclear plants, Russia is essentially engaging in atomic terrorism. This country also clearly demonstrates that nuclear power is unsafe and cannot be included in Covid recovery or Climate protection measures. Moreover, Russia is clearly threatening to deploy nuclear weapons, which is inexcusable.

– The war has already led to an increase in military budgets. This further exacerbates the problems of inequality. Post-covid support and funding is going largely to male dominated sectors such as armament, engineering and transport whereas those on the frontlines of the Covid-crisis, the care workers in the health sector and education sector – mostly female sectors – have not received the needed support.

– Small and medium-sized producers of safe food for local consumption, who are concerned about soil and water, should be supported as part of the recovery for food security. It will also reduce greenhouse gas emissions by not transporting food long distances. Rebuilding Ukraine will need massive investments in green infrastructure, energy efficiency and renewable energy, which should also be a focus of Covid recovery programmes.

– Recovery should take place with consideration of the state of the environment, which should be well documented. Military actions lead to environmental destruction. In some cases we can speak of crimes against nature – also called ‘ECOCIDE’ – when it comes to pollution of rivers by toxic coal-mine run-offs, the burning of nature reserves, the increased radioactive emissions from Chernobyl’s ‘red forest’ or the enormous emission of pollutants from Russian attacks on factories.

– It is necessary to take into account the recovery measures already implemented. For this purpose it is required to conduct research, including social and gender analysis. OECD database on recovery measures has to be used.

– Public participation is essential at all stages of recovery activities.

“Stockholm + 50″ is an international meeting of the UN General Assembly, which will be held for the fiftieth time in Stockholm (Sweden) on June 2-3, 2022. Fifty years ago, governments decided to cooperate in the field of the environment by creating a UN program on the environment. Since then, many countries have environmental ministries and have begun to cooperate in the field of sustainable development and climate action, – says Andrii. – In June, Sweden is holding a global meeting with many stakeholders to learn from the experience of these 50 years and hope for the future. Participation in discussions on such platforms allows to cover in general the crimes against people and nature, the ecocide that is happening in Ukraine today. And also to talk about the qualitative reconstruction of the country after that and the priorities in building a better, safer future for the planet and humanity, which must be based on a caring attitude to nature and safe energy.”